Warning: "continue" targeting switch is equivalent to "break". Did you mean to use "continue 2"? in /nfs/c02/h01/mnt/23907/domains/blog.jeffvespa.com/html/wp-content/plugins/jetpack/_inc/lib/class.media-summary.php on line 77

Warning: "continue" targeting switch is equivalent to "break". Did you mean to use "continue 2"? in /nfs/c02/h01/mnt/23907/domains/blog.jeffvespa.com/html/wp-content/plugins/jetpack/_inc/lib/class.media-summary.php on line 87

Warning: count(): Parameter must be an array or an object that implements Countable in /nfs/c02/h01/mnt/23907/domains/blog.jeffvespa.com/html/wp-includes/post-template.php on line 284

HuffPost: The Story Behind That Photo Of Leo Texting After His Oscar Win 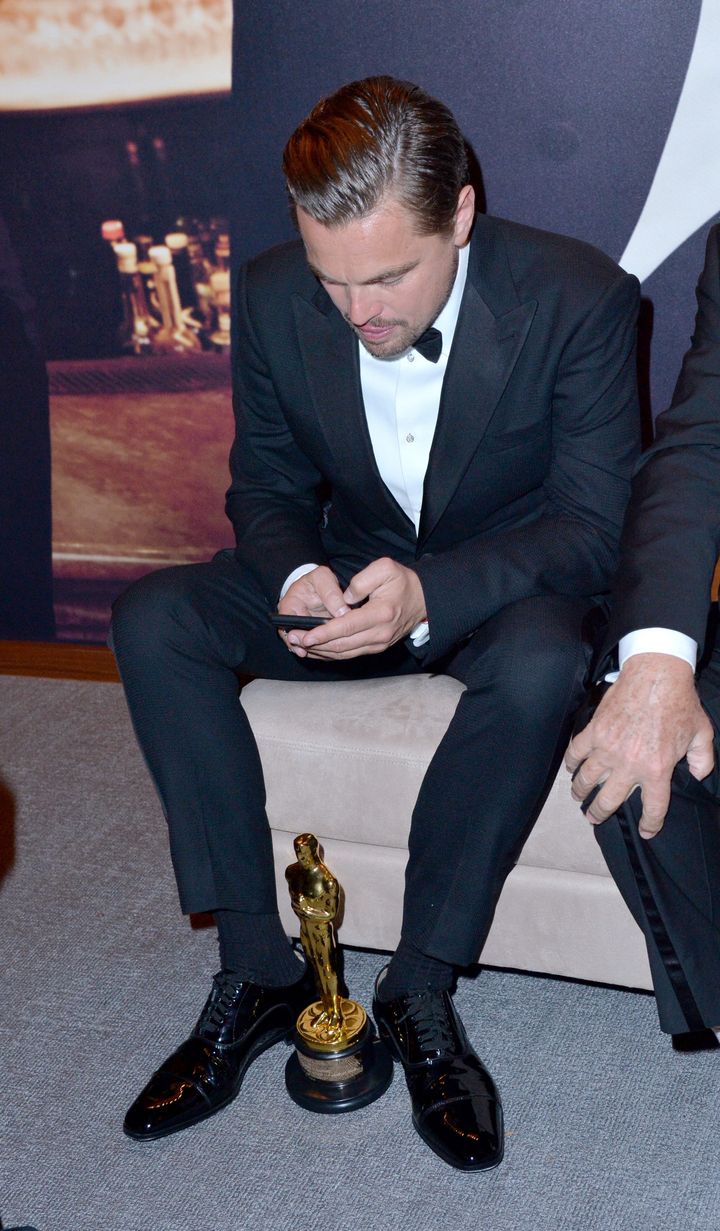 It took Leonardo DiCaprio five nominations to win an Oscar and one photo to prove he was chill about it.

You remember the one: Leo, seated away from the crowd at the Vanity Fair party, head bent over a phone while his Oscar sits on the floor between his legs. Just a casual night out in an Armani tux.

Evidence of an A-lister acting normal after scoring Hollywood’s biggest prize is made for online vitality, and the Leo photo didn’t disappoint. Even Oscar winners need to text their buddies, right?

Jeff Vespa, a veteran celebrity photographer who used to work for Warner Bros. and New Line Cinema, was the lucky person to snap the picture. Vespa has captured Hollywood events since shooting the “Bulworth” premiere in 1998. On that fateful Oscar night last year, he spotted DiCaprio in a corner, an entourage flanking him. Vespa asked to grab the Best Actor winner for a few posed shots, to which his publicist responded, “No problem, just give him a minute.”

Vespa noticed DiCaprio set his Oscar on the floor, which struck him as interesting. Who would let go of their coveted little gold man? “That alone is crazy,” he said. “You just don’t see that.” And then, like the parting of the Red Sea, the crowd surrounding DiCaprio dispersed, leaving the actor typing on his phone. There was Vespa’s moment. He seized it. “Literally after, I saw the people move back in front of him, obscuring the view,” Vespa said.

So goes the clamor of post-Oscar photographs. Vespa is a key figure in that scene, having co-founded WireImage, the entertainment platform that Getty Images acquired in 2007. Vespa has shot the Governors Ball and the Vanity Fair party ― two illustrious Oscar galas ― for more than a decade. Having befriended many celebrities and their publicists throughout his tenure, which includes serving as official photographer of the Sundance and Toronto film festivals, Vespa has captured defining backstage moments now lodged in the Oscars’ glitzy history.

“My life is lived in a matter of seconds,” he said. Miss an unlikely interaction or the shimmer of a winner’s golden statues, and that’s that.

For the time time in years, Vespa will sit out Sunday’s Oscars. He directed his first film last year, the historical drama “Amre,” so Vespa is stepping away from certain photographic duties to embrace the other side of Hollywood. Soon, the photographer could become the photographed.

In the meantime, The Huffington Post has a gallery of Vespa’s celebrity images over the years. You can see more on his Instagram.